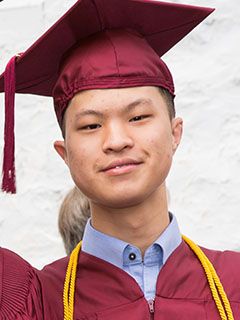 Sungho Yoo ’17 came to the United States from Korea as a 9th grader, leaving his family behind to pursue his studies. He was initially placed in a day school in Kansas. “Hollywood movies were the only window through which I had seen America when I lived in Korea. The portrayals were mostly wealthy white people. Even during my time in Kansas, I didn’t feel like I really had a feel for true American culture,” he recalls. That all changed when he transferred to Church Farm School in 10th grade. “The environment was so diverse! It was something that I never expected to exist in America. It opened up my perspective to a completely opposite view of that world.”

Living within a diverse environment—ethnically, financially and otherwise—was important to Sungho. “Like Korea, America suffers through economic division. Church Farm School has helped me to develop my passion, which is to help resolve that division.” Sungho hopes to pursue that passion while studying at Johns Hopkins University (JHU). “I selected Johns Hopkins [over Rice University in Texas] because Baltimore has an underserved population and the school is very much involved in helping achieve economic equality there.” Sungho plans to study neuroscience, and says JHU offered the most federal grants for undergraduate research.

Being a train ride from his family, who moved to North Carolina from Korea the summer of his junior year at Church Farm School, was another deciding factor. Sungho was a stellar student at Church Farm School. While he says it took him a year to acclimate and come out of his shell, he embraced all of the opportunities the school offered to excel in class, on the athletic field and through clubs and extra-curricular activities. He says he really enjoyed AP Calculus and Physics with Mr. Matt Labrador, plus serving on the Student Council; the TEDx, DECA, Greystock News and Robotics clubs; and varsity golf, tennis and track teams. “At first I hated the idea of mandatory sports,” Sungho says. “But ultimately it made me stronger and more interested in sports than I ever was.”

Through it all, Sungho says the school “helped me become more fluent in communicating with people of other backgrounds.” Boarding school has also prepared him well for being independent and living alone. “I’ve grown into a young adult here. The school has helped me get out of my comfort zone in a lot of ways.”