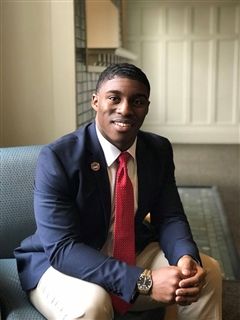 Maceo Sample ’16 attended Church Farm School for just two years, but the Alaska native made a big impact during his short tenure, always offering a warm smile and positive energy to his peers and faculty. Maceo says the transition to private school was initially difficult, because his public school in Anchorage had been much stricter and oftentimes “felt like a prison.” “Church Farm School allows their students to express themselves in a positive manner. There was a schedule and criteria to be met, but after that, I was able to manage my own time,” he says.

When it came time to decide on college, Maceo said he created an Excel spreadsheet to compare costs of attendance and other factors for the 16 schools to which he was accepted. “I found that Central Washington University had a better cost per year, more offerings and was on the west coast, which is closer to home. Everything about the school fit exactly what I was looking for in a university.”

Maceo says he wasn’t sure what major he wanted to pursue when he arrived at CWU; he advises researching different fields through a mix of academic work and fieldwork to find out what interests you most. “In the summer of 2017, I worked for Target as a back stocker managing inventory. Although I was not high in the chain of command, I always asked questions, which allowed me to gain more knowledge about a field I would later come across.” That field is Supply Chain Management, which Maceo declared as his major this year (along with Economics). The dual majors, along with his involvement in campus groups including the CWU Supply Chain Management Association, the CWU Economics Club and his role as the Vice President of Public Affairs for the CWU Investment Group, helped him nab a prestigious 10-14 week internship at Boeing that will start this summer.

“The Boeing internship is huge here at CWU. There is a lot of competition between students, and it is no easy task to receive an offer. My first encounter with the Boeing Company was called the Boeing BASE program, which is a Supply Chain Boot Camp that you undergo for a week. There are three stages of interviews before you are accepted to the program. Considering that I was a freshman at the time and the first freshman Student Ambassador for the College of Business, I made it to the second round, however, I did not make the last round because I didn’t declare a Supply Chain Management major. By the beginning of my junior year, I had declared two majors and had the experience that Boeing was looking for in an applicant. I also made efforts to establish a relationship with department chairs of both respective majors, and put forth effort to be active in the community. These tiny details set me apart from the rest of the applicants for the Boeing Business Internship Program. I will be doing Supply Chain Analysis for the company. This means that I manage inventory and mitigate through shortages or surplus problems. If that sounds familiar, then you probably heard me say the same thing about my time at Target.”
TIPS FOR GRIFFINS ENTERING COLLEGE FROM MACEO SAMPLE '16

1. College is only hard if you make it hard. You come from a school that enables you to grow and mature much better than other students elsewhere. Your school has instilled in you time management, resource management, ethical codes of conducts, and other things that you might not notice until later. Use all of what you have been taught to your advantage.

2. Beware of distractions. It is okay to have fun after you finish your work. The only place fun comes before work is in the dictionary. Be sure to enjoy yourself, however, know when it is time to call it a night or where to go to stay out of trouble.

4. Get involved early and often. This will establish a good character for your name. When you arrive to a new place and no one knows you, your name, character and actions are all you have. You should always show the best part of you. It will gravitate good karma, especially if you are whole hearted in your intentions.
Letter to Griffins from Maceo:

Some of you may not know me, but I was once in your shoes. My name is Maceo Sample and I am here to send you a message. Take your school seriously. You can go very far with a great education. Seek help when you are struggling and do not be afraid. A wise man (my father) once said, "Closed mouths do not get fed." Be sure to enjoy the simple parts of life; family time, friend time and most importantly, "you" time.


Get to know yourself, set your core values and keep an open mind, but never be afraid to fight for what is good and righteous. I live by one rule: "Make Bread." Because bread cannot make itself. If you learn to make bread the right way, it tastes so sweet and so rewarding that you’ll understand what it means to be a breadwinner.