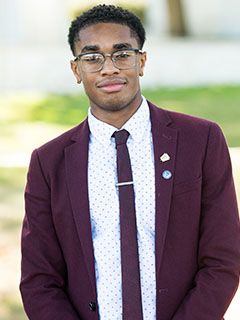 LaMarre Jean, of Norristown, PA, is another five-year-fighter who has grown tremendously as a leader and as a person at CFS. The Student Congress President, he is a capable and visible mentor to his younger Griffin brothers. He was living with his mother and a attending a local private day school when he started thinking about next steps. CFS was recommended to him, and it stood out as “having opportunities that I didn’t think I would find at other schools.” LaMarre has risen to the opportunities. In addition to being school president, he is also a student ambassador, cottage prefect, member of M Club, Relay for Life and the National Honor Society and served as the captain of the Track and Field team. “The brotherhood at CFS is like no other. It is by far the strongest aspect of the school and I will truly miss my brothers the most.”

“I know I would not be the student I am today if it weren't for the connections I have established in my five years at Church Farm School. I am no longer the 14-year-old boy who walked onto this campus with little sense of how the world worked. I have learned so much beyond academics during my time at CFS and the creation of the man I am today speaks to that. My young mindset was forced to mature, because I never knew true friendship until I came here, I never understood brotherhood until I came here, and I never experienced loss until I came here. I gained real strength at CFS and I learned to persevere through hardships that many outside this community would not understand.”
He hopes to study communications next year at Hampton University.” I definitely think that the strongest aspect of CFS that prepared me for school was the boarding lifestyle.”