When you are from the inner city, you see things in a certain way. But when you’re around boys from Korea, Brooklyn, Atlanta … you stop seeing color. You just think, ‘that’s my brother.’ My introduction to diversity came from my days at Church Farm School. 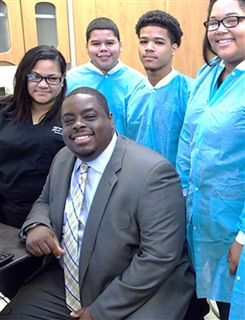 John Suggs ’00 was a third grader at Harrity Elementary School in West Philadelphia in 1990 when the principal told his class that they needed to bring their parents to a special assembly. John lived across the street from the school in an apartment with his single mother, who was struggling to get by and debating moving her family to Florida. When they arrived at the assembly, there were news crews gathered to cover a big announcement. Jane and Robert Toll of Toll Brothers shared with the students and their families that their Jane and Robert Toll Program of the Philadelphia Chapter had been formed [part of Say Yes to Education], and would offer those particular 57 third-graders a free ride to any college in the country if they graduated high school. “It was not only a miracle that they picked my school, but my class,” John recalls. “We took their offer as an amazing challenge; one that came at the absolute best time for me and my family.” Jane Toll was very hands-on with the students. “She knew I had potential and wanted to make sure that college was in my future,” John says. Toll researched and visited Church Farm School, then brought John and his mom for a tour with the late Rich Lunardi. He matriculated to the school as a 9th grader in 1996.

John dove right into life at Church Farm School. “I was a part of everything … the Headmasters Advisory Council … the Conduct Review Board … the Christmas Pageant. That always got me in the Christmas spirit,” he says. A self-described non-athlete, John enjoyed managing the basketball team, studying English with Ray Greenblatt, being a part of the monthly “Teen Voices” live broadcast radio show on the annual Multicultural Dinner held in February, where faculty and parents worked to create special dishes from their various cultures. “We had Korean food, Soul food, Spanish food … my grandfather made ribs. It’s a great remembrance to this day,” John says about a tradition that is still a student favorite.

The diversity of the student body was impactful to John. “When you are from the inner city, you see things in a certain way. But when you’re around boys from Korea, Brooklyn, Atlanta … you stop seeing color. You just think, ‘that’s my brother.’ My introduction to diversity came from my days at Church Farm School, and has shaped me to be able to operate in the lane I am in now.” That “lane” is an impressive career in community outreach, particularly to underserved youth. After graduating with a communications and marketing degree from Eastern University [he also has an MBA from Webster University], John became involved with various Philadelphia philanthropic outreach groups: Big Brothers Big Sisters, Boys and Girls Club and even the Philadelphia School District. Currently Executive Director of CF Charities in Philadelphia, John has hosted a variety of outreach efforts for families and students ranging from holiday drives, teen programs and anti-violence summits in Philadelphia, plus worked with youth groups in Ferguson, Missouri, and Madison, Wisconsin, with actor and activist Hill Harper’s Manifest Destiny Foundation. “I’m so proud of this work. It’s a real blessing to be able to give back,” John says.