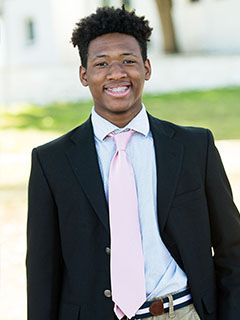 Dion Mathews ’20 came to CFS as a 9th grader from Atlanta, Georgia, where he had been attending the prestigious Ron Clark Academy (his little brother, Jordan, matriculated to CFS as a freshman this year). Dion says the small size appealed to him. “I wanted a place that was small enough for me to feel like I was a part of something more than just a school.” Dion has become a part of many things, in fact. He has served as a cottage prefect, student leader, varsity lacrosse captain and his bright smile has often graced CFS marketing materials, including brochures, magazines, ads and videos. Dion is planning to attend Middle Georgia State University, to fulfill his longtime dream of becoming a pilot.

He feels ready for the experience. “CFS has not only prepared me academically, but when it comes to being socially aware and independent, I feel ready for anything. I grew here and was given a chance to succeed. I played sports I had never even heard of. I built a network of friends that live worldwide. I had fun and lived my high school experience in a place filled with people that didn’t want to see anything but me and my class make it in life. So, for that I give one final thank you to CFS and ask, ‘What’s not special about this place?’”
Summarizes his advisor, Mr. Bob Warfel, “Of all the advisees I have had so far, Dion has been the easiest and most consistent. He has always known who he is and what he wants and I have no doubt that in 5 or 6 years he will be flying commercial jets around the world. I will miss him. Bon Voyage Captain Mathews!”