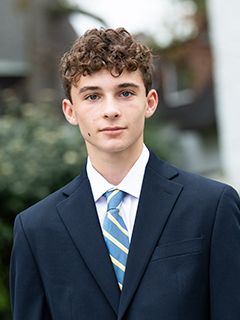 Cooper Shivers ’23 joined the community this year as a day student after he and his family wanted a change from public school. Born and raised in Glen Mills, about 20 minutes from the school, Cooper has been playing basketball since he was five. “I wanted more opportunities in basketball, and my grades were going down from online school during the pandemic.” Cooper and his parents couldn’t be happier with his progress at Church Farm School.

“My parents love this place. They think I’ve grown up so much and have learned to take an interest in things besides basketball; I’m definitely more motivated to do work.” Cooper says he knew when he came to CFS that the brotherhood was strong. “I didn’t really understand until I was here how deep that is. Sometimes you come to a new place and people aren’t that friendly. Everyone here has made me feel so welcomed and included.”

He says he was also aware how strong the school was academically, but he really learned more about the depth and breadth of the school’s academics once he was on campus. “My favorite class is English, probably because it’s the subject that comes the most easily to me,” he says.

Another area where Cooper has really shined is on the basketball court. The point guard helped the varsity team to the BAL District 1 AA Championships, which they won. The team then made it to the second round of the PIAA 2 A State Playoffs before falling to Holy Cross. “We always felt like we could go all the way,” Cooper says. “Next year we hope to go even farther.” Cooper says having his advisor, Dan Dratch, as one of his coaches, is a benefit. “It helps me to make sure I’m always doing the right thing, in the classroom and on the court.”