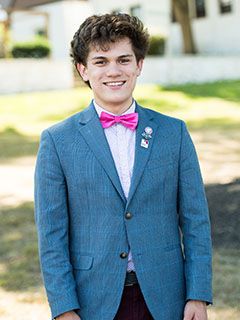 Christopher “CJ” Mulcahy came to Church Farm School in 10th grade, matriculating to the school as a day student the same year his mother, Vernice Veranga-Mulcahy, was hired as a science teacher. CJ says the diversity and brotherhood of the school was appealing to him. “I liked how my classmates were from many different areas. I wouldn't have gotten that experience at other schools around here.”

CJ has quickly made a name for himself among his peers and amid the faculty. A hardworking student and athlete, he has excelled at track (earning the Coach’s Award in 2020), participates in the school band and even earned his Eagle Scout by creating new benches for the school’s south campus so that his peers could better enjoy time outside (his Eagle Scout ceremony was held in the school’s Chapel).

“At CFS, I have harnessed and sharpened all of my positive traits.” Next year, at the University of Pittsburgh, CJ hopes to study biomedical engineering and “use all of the preparation I have received throughout the years for the true test of life.”

Says his advisor, Ms. Nicole Campbell, "When CJ first came to CFS as a 10th grader he was very shy and not thrilled to be here. Since then, he dedicated his Eagle Scout project to working on new benches for the school, has been an active member of the track team and has been in the band. Watching CJ come out of his shell and develop into this vibrant young man has been such a joy. He is extremely driven and intelligent and I know CJ is destined for great things ahead!"